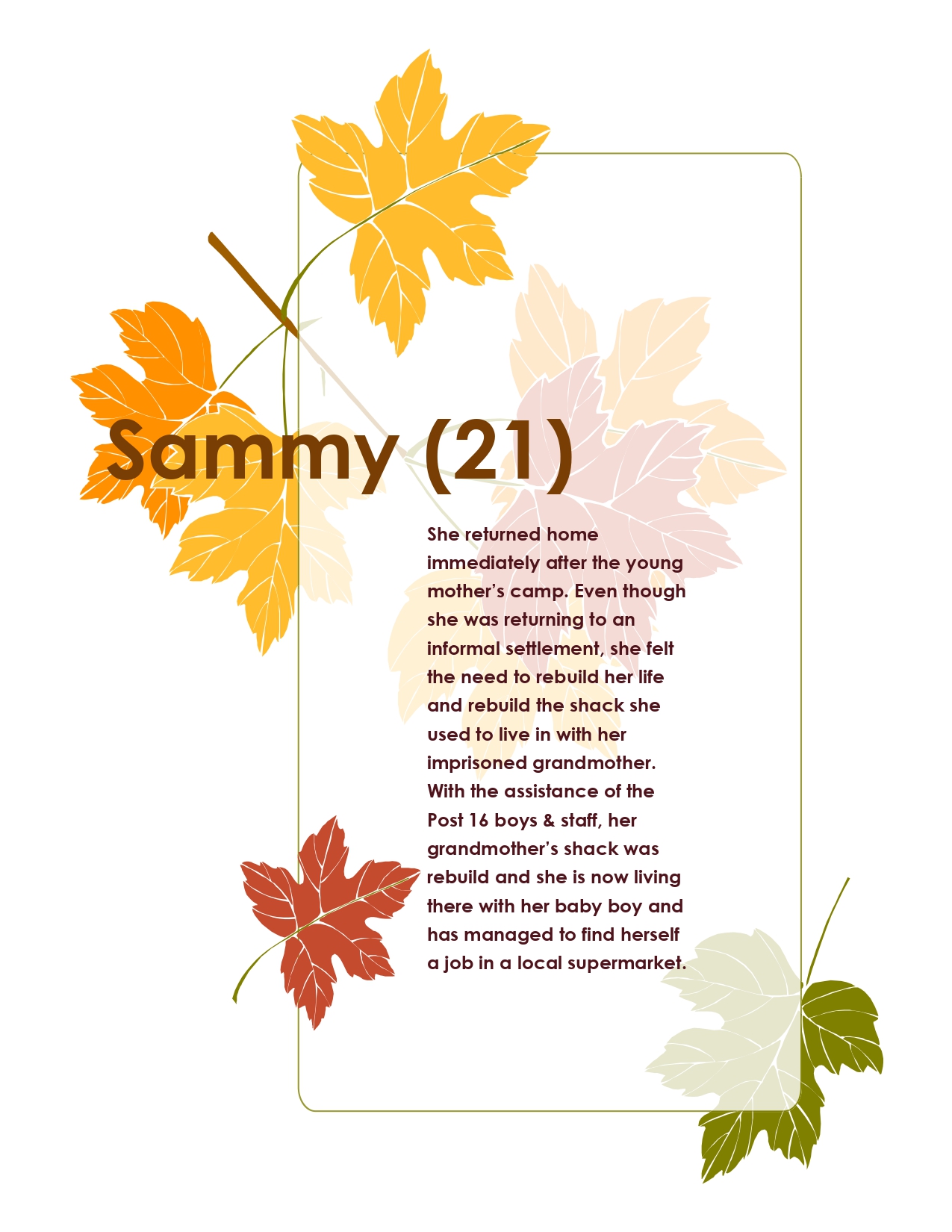 “What does Reintegration look like for a Young Girl who has lost Hope but find Hope in a unconvetional way???”

“Amusa” (20) has been on the streets for the past 4 years. uMthombo journeyed with “Amusa” during outreach sessions as well as in our Girls Programme. It has not been an easy process to work with her, looking at her adoptive background, her living on the streets and being hooked into number substances and almost immune to street life. Although difficult as it was, she religiously attended various psychosocial sessions aimed at empowering young women, helping them make life giving choices for their lives, which could lead to being independent.

In these years various attempts were made to reintegrate “Amusa” with her adoptive family but these failed due to a total collapse of relations with her adoptive mother, who was no longer supportive to her. In addition to this, her behavioral challenges made matters worse even when placed at a girl’s place of safety. Her life seemed to be going on a downward spiral and then she disappeared late November 2018 and could no longer be seen or collected at her usual spot.

Later in the year just before the summer holiday break, “Amusa” took an initiative to contact the Girls Programme Facilitator to inform about her whereabouts. She informed the facilitator that she took a decision of living the streets after she had found a boyfriend who is a taxi driver. The boyfriend took an interest in her life story, after she had confided in him and he wanted to know more and how he could offer further assistance to her. The Girls Programme Facilitator took this invitation to engage with him and ascertain her safety, since she had taken her own initiative to live with the boyfriend’s family in the western township of the city. By this time

“Amusa” misuse of substances had been dealt with assisted by her boyfriend’s family.

Regular contact and psychosocial sessions were undertaken with “Amusa”, the boyfriend and family for the past 11 months and it appears that all is still in favor of “Amusa”.

The support she has been given and the home she has found for herself, has in a way changed her outlook to life. Currently, efforts are being made to make contact with “Amusa” adoptive mother in order to mend their relationship and sort a way forward as she begins a process of re-establishing her life.

As uMthombo we carefully supporting this type of moving forward or steps towards care & opening to some sort of security, it is done with great caution, understanding the dynamics that are at play in terms “Amusa’s” safety and overall wellbeing. Undivided attention in monitoring her current living arrangements is crucial, ongoing individual support and tailor-made psychosocial sessions to empower “Amusa” in her current lifestyle will be imperative. This is to ensure that her chosen lived experiences well balanced and that when she feels unease and encounters challenges in the future, she able to make life giving choices for herself.

…..Steps in redefining what reintegration might look like for individual Adolescent Girls and Young Women who are street-connected…..


“Thube” (24) took a decision to search for herself a form of shelter that will enable her to improve her and her baby boy’s life and being independent in doing so. She had managed to save up some money from begging on the traffic lights, found an odd job in a local salon, which didn’t last that long but was able to go forth in her plan. A major motivation that turned around her circumstance was a nagging worry about her young boy who was now of school going age but while both were on the streets, this reality to see her baby boy go to school was very slim.

Although quite late in the year (November 2018) she came forth with the above plan and looked determined in making it happen. It was at the beginning of 2019 in February where she had saved enough money to rent a corrugated iron one room shack in a nearby informal settlement called Mayville, also hoping to find a school for her little boy.
The challenges encountered early on by the year end in 2018 related to the little boy not having a birth certificate, which since he was at that point almost 6 years, a very lengthy process needed to be followed for the Home Affairs verification processes. This caused delays of up to 6 months which it was too late for 2019 school enrollment.

With uMthombo’s assistance, the unabridged birth certificate was received in June and ready for 2020 school enrollment. “Thube” has also been able to access her Child Support Grant and combined with the money she receives from begging is able to live and put food on the table for herself and child.
Our journey with “Thube” started in 2015 April, not being regular on her attendance and often disappearing for prolonged period of times. In 2018 from the beginning of the year she became consistence bringing her baby boy along at uMthombo. The space provided at the Centre gave an opportunity for her to focus on herself for a little while, through the psychosocial life skills sessions, while the little boy was given attention through fun and play by one of our child & youth care worker.

Her background from a mother who lives on the streets, an abusive extended family and her having to live with a mild mental condition made it difficult to find solace in any of the immediate family or community where she comes from.
“Thube” is still currently unemployed and she still begs at the traffic lights to get some money and yet still maintains the routine of going back to her shack to be in a safe environment with her baby boy.

As we continue to engage with “Thube”, providing psychosocial support and assisting with nutritional needs from time to time we get inspired by her tenacity and the ability to go beyond her needs. Lately in our interaction with her we discovered that she has taken a new young women, who has just been exposed to street life for safety, in her corrugated iron one room shelter.